It’s been a long ride – starting in 2007 when IronRuby was introduced running in Silverlight. Things started out slowly, but for the last year we’ve moved pretty quick, have gotten great feedback, and IronRuby is due for another bump:

We’ve exceeded our goals for 1.0, and still plan on further excess before 1.0 is final. Let’s dive into our top goals: performance, compatibility, and CLR integration. 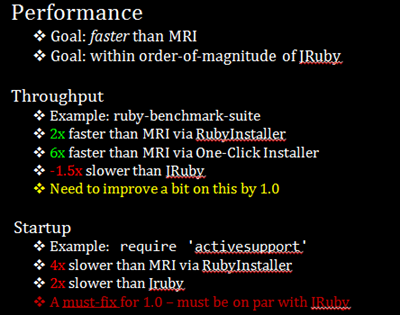 We’ve been tracking performance against MRI 1.8.6, which though isn’t a final performance goal, it’s a good measure of performance for a 1.0. In the next major release we’ll start tracking MRI 1.9. In general we’re a significantly faster than MRI, but still a tad unacceptable compared to JRuby – that needs to be fixed before 1.0. 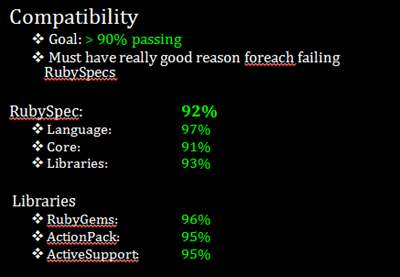 We measure compatibility against RubySpec, as well as some popular Ruby libraries (only the top-used ones are shown here). We’re over 90% for every group of tests. In practice, compatibility is being tested against almost every library we can get our hands on, which is a ton, so I feel confident IronRuby 1.0 will be a very compatible Ruby implementation.

As I said in a previous post, this compatibility measure is against 1.8.6; IronRuby does not yet suppor 1.9 completely, though we may quickly change our opinion on this. 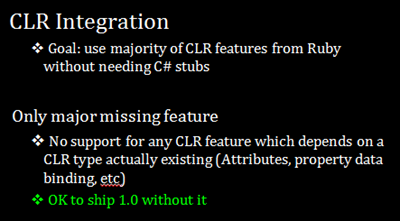 CLR integration is very flushed out, supporting using all CLR classes, calling all methods, properties, etc, generics, inheritance, and all the other CLR features exposed to managed languages such as C# and F#. The only missing hole is generating actual CLR types and backings for Ruby types, though we feel this is an OK feature to ship without, because the work-arounds are simple. However, it will be a priority to fix in the next major release. 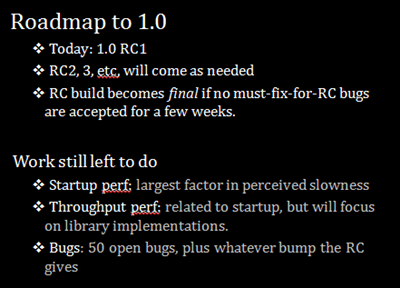 With RC1 being released, RC2, 3, etc. will come as the community reports issues that we all agree must be fixed by 1.0 final. As far as the core team’s priorities, we want to fix startup and throughput performance issues, as well as get through the backlog of bugs. 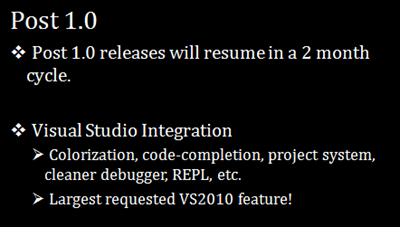 After 1.0 is released, we’ll probably take a bit of a break, but then look to do some features we didn’t get to finish in 1.0, as well as Visual Studio Integration, since it’s the highest voted feature for VS2010:

Download the IronRuby 1.0 RC1 and let us know what you think! You can submit any issues you find to the CodePlex site. Thanks!