Since doing a post about Ruby testing of Silverlight applications, I’ve felt a bit guilty about leaving Python fans in the dark. However, like Ruby, it takes very little work to run Python unit test frameworks in Silverlight, since IronPython is a very compatible implementation of Python. Though my results aren’t as exhaustive as the IronRuby examples, here’s one simple example: 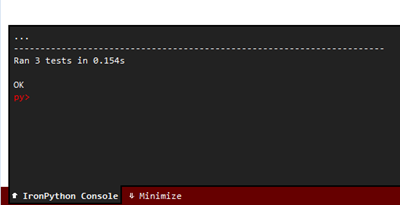 The original example is from the Python website’s unittest documentation. Very little bootstrapping is required to get this running in Silverlight; this is u1.py code that is the start-script for the Silverlight app, which runs the tests:

I did have to make a modification to unittest.py; removing a call to sys.exit since Silverlight doesn’t support that, and just returning the exit code.

There’s also a GUI test runner (http://pyunit.sourceforge.net/pyunit.html#GUI), so it might be interesting to port that to Silverlight to get a nicer test run graphic along with the console, but it’s great that the REPL enables this to just work =) It also helped me find some bugs with the REPL, which will make their way to the IronPython source code shortly.

Let me know how it works for you. The next step is to tackle testing Silverlight C#/VB apps with Python.